Weed Eyes: Why Does Weed Make Your Eyes Red and Mouth Dry?

Ever smoked a joint and headed out for the day, only to catch a glimpse in the mirror and see those tell-tale red eyes looking back? There’s nothing more betraying than the red weed eyes that come with smoking cannabis. 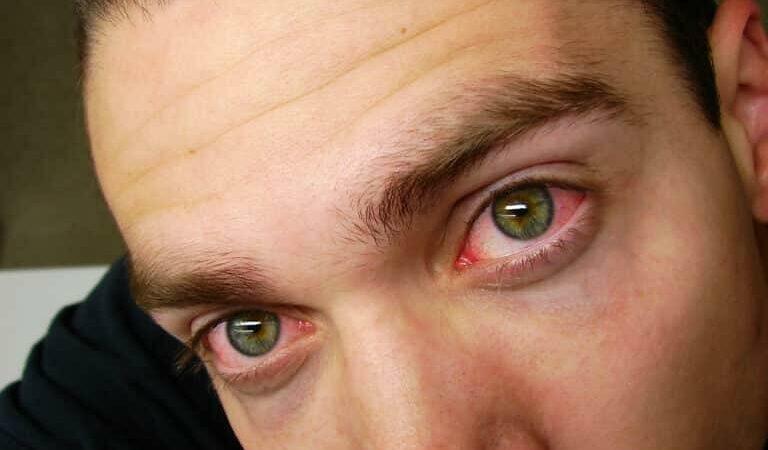 And no, it is not remedied by switching to eating edibles or consuming a tincture. It’s not the smoke that causes the redness. The dead giveaway that is bloodshot eyes can actually happen from various methods of consumption.

Beyond red weed eyes, you may also experience a sensation known as “cottonmouth” after smoking or eating cannabis. That’s when your mouth gets dry and maybe even a bit sticky. Contrary to popular belief, this experience is not caused just by smoking. You can get cottonmouth if you eat an edible or consume a tincture, too.

So let’s take a look at what causes those red weed eyes and the dry, sticky cottonmouth that comes with cannabis use.

If it’s not irritation from smoke that causes your eyes to get red when you indulge, what is it?

The answer lies (mostly) in the way cannabis lowers blood pressure and can dilate capillaries. Marijuana’s effect on blood pressure is the primary reason it is sometimes used to treat glaucoma.

Now, it’s important to keep in mind that while many use cannabis to manage their glaucoma, there have been other studies that contradict its role. For instance, one study found that CBD in marijuana may actually raise eye pressure and worsen glaucoma.

Regardless, we know that when users smoke or ingest weed, they typically experience an increase in blood pressure and heart rate. WeedMaps describes this as comparable to other physical activities, such as exercise.

However, shortly after getting the initial effects from cannabis, heart rate returns to normal and blood pressure begins to lower. Along with lowering blood pressure comes dilation of the blood vessels and capillaries. And that includes the ocular capillaries – in your eyes.

The reason cannabis can reduce blood pressure and cause bloodshot eyes is because of the cannabinoids present in the plant. Various cannabinoids contribute to different effects.

That’s why it doesn’t matter if you eat, smoke, or vape cannabis. You have the potential to get red eyes if the cannabinoid content is high or potent enough. Specifically, it comes down to the amount of THC in the plant, as not all cannabinoids contribute to lowering blood pressure and thus causing bloodshot eyes.

So, if your edibles get you high, there’s a good chance they’ll also make your eyes red. Have some eye drops on hand if you don’t want your eyes to betray you!

While red eyes may be more obvious to observers, you might notice cottonmouth before you even have a chance to look in the mirror. Many people think that cottonmouth, which refers to a dry and sometimes sticky feeling in the mouth, is caused by smoking only. However, much like red eyes, cottonmouth can happen from vaping, consuming tinctures, or eating edibles.

It makes sense to think that smoking specifically causes the mouth to dry out. But that’s not necessarily the case. Many studies have looked at the effects of cannabinoids on salivation without having participants (or rats) smoke. And the consensus is that some cannabinoids can contribute to a decrease in saliva secretion.

We know that cottonmouth happens because when we consume cannabis, certain cannabinoids, such as anandamide, influence activity in the salivary glands to cause a decrease in production.

Bonus: How to Infuse a Watermelon with Weed

This decrease in salivation has nothing to do with the rest of the body. It is not indicative of dehydration – even though it may feel like it when it happens. So while you may feel groggy or experience a “weed hangover” after a long night of toking up, you won’t experience the typical “hangover” that is partially associated with dehydration from drinking.

Perhaps the most compelling information that comes from research into cottonmouth is more potential for cannabis to provide therapeutic effects. Scientists believe the information they have gained learning about cottonmouth could lead to new therapies for people with conditions relating to salivation.

How do I get rid of red weed eyes and cottonmouth?

Your best defense against red eyes is using an over-the-counter eye drop. Eye drops are easy to get your hands on and will save you a lot of stress if you frequently find yourself in situations where it’s not ideal to reveal just how much you love cannabis.

Plus, eye drops work extremely fast to clear out any redness and give the appearance of clear, non-intoxicated eyes. If you’re in a pinch, it will only take moments for your eyes to clear up. That’s about as fast of a remedy as you can get.

As far as the cottonmouth goes, drinking water is a great defense against dry mouth. According to DocMJ, chronic cannabis users should pay attention to their oral health, as some risks may be associated with chronic dry mouth. These include lesions, increased yeast, or even periodontal disease.

They refer to suggestions from the American Dental Association, which suggest cannabis consumers regularly visit the dentist. Sugar-free gums may be a good option to prevent cottonmouth as well because it prevents the endocannabinoid signaling that causes limited saliva production. Additionally, dentists may suggest reducing your intake of citrus and even mouthwash because it can contribute to drying the mouth out.

To prevent cottonmouth or negative effects from frequent dry mouth, keep good care of your oral health. But for more immediate relief, like right after hitting the bong, drink plenty of water and consider chewing sugar-free gum. You can even chew on some ice cubes to spice things up.

When you consume cannabis, there are a lot of physical changes that happen. Beyond just feeling high, it’s common to experience red eyes and dry mouth. Many people believe these symptoms are tied to smoking, but the reality is that any consumption method can cause these effects.

Luckily, both are pretty easy to take care of. Put some eye drops in and drink some water and you’re good to go.

Stop on by our Spokane dispensary, Bellingham weed shop, or any Washington dispensary location to stock up on all the goodies. We’ve got everything you need to make your eyes red and mouth dry. And more!

Keep Reading: How to Get Rid of the Smell of Weed