Do Dabs Smell? Here’s What You Should Know

We’ve all had a nosy neighbor or roommate that makes it nearly impossible to enjoy getting high in peace. Sure, adult-use cannabis is legal for everyone near our Washington dispensary locations and Alaska dispensary, but that doesn’t mean everyone is excited about being around it. If you’re looking for new ways to get high that don’t involve the obviously smelly option of smoking weed, you may be wondering, do dabs smell? 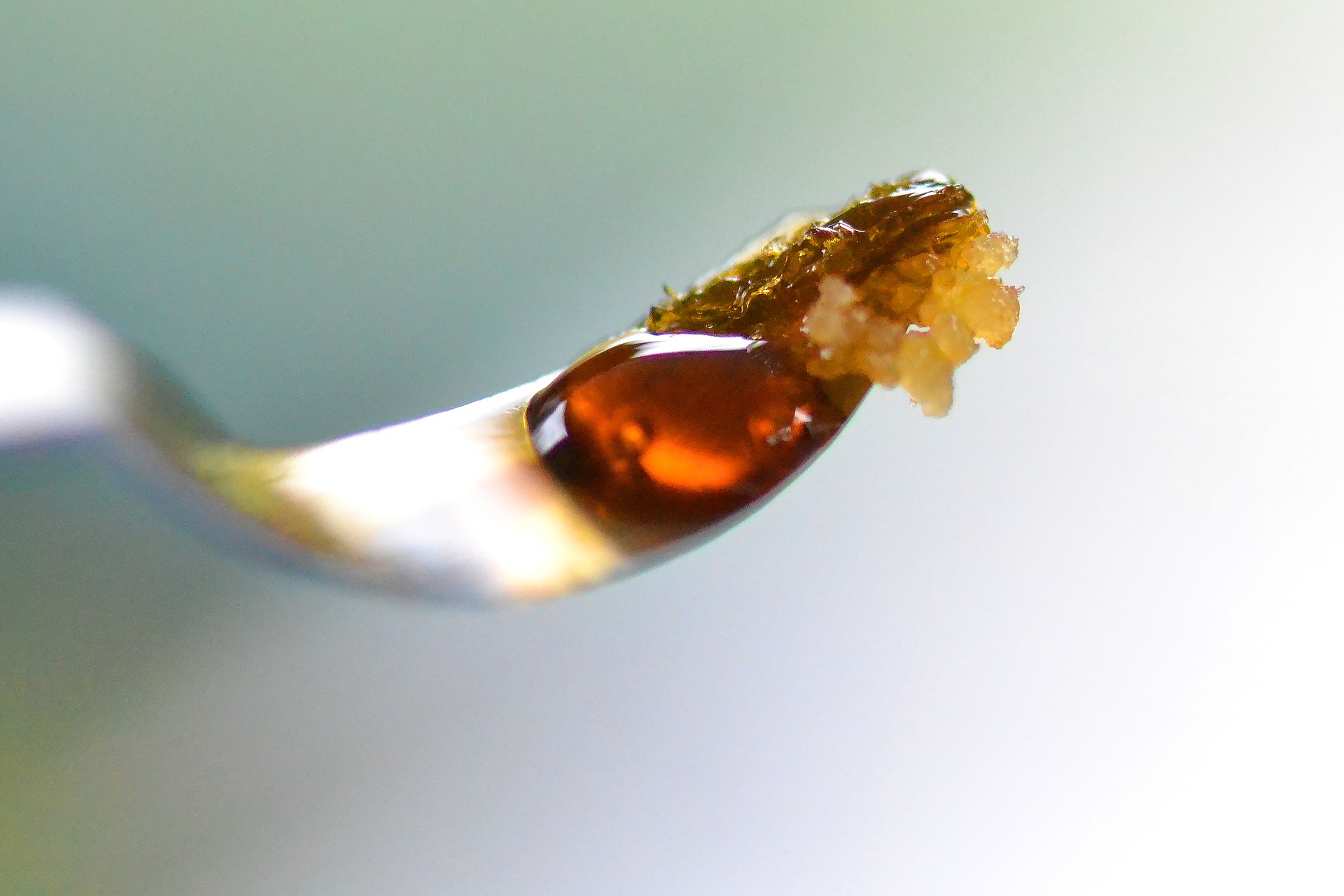 Back up…What are dabs again?

We’ve discussed dabs in detail in our Beginner’s Guide to Cannabis Concentrates, but we’ll give you a quick crash course here. Go on and jump ahead if you’re already familiar with dabbing.

Made from THC and other cannabinoid extracts, dabs are concentrated doses of cannabis that come in various forms. They are typically created by extracting THC, CBD, or other cannabinoids with a solvent. The final product is a sticky, potent substance that can be heated on a hot surface to inhale the vapor.

Most people dab using a dab rig. This is an accessory that resembles a bong or water pipe but is built specifically to accommodate dabs. Concentrates are heated on a nail, and then the vapor is inhaled through the mouthpiece.

Vapor is the keyword here. When you heat cannabis extracts on a dab rig, they get so hot that they produce vapor. They do not get so hot, however, that they combust and produce smoke. Naturally, no smoke would lead many to believe that dabs are odorless. That’s not necessarily the case, though.

Yes, dabs produce a smell. It is a common misconception that no smoke equals no smell, but this is not true. However, dabbing produces much less odor than smoking and can be a much better alternative if you have roommates or others around who do not like the smell of cannabis smoke.

Dabs smell like the dominant terpenes present in whatever concentrate you are using. They typically don’t smell harsh or like something is burning, but rather emit an herby, natural odor.

The quality of your concentrates will play a large role in the smell they produce. The better your product, the stronger the smell will be since the terpenes and other compounds have not been destroyed during processing.

The size of your dabs will also play a large role. Naturally, a small dab will smell much less than a big one. If you’re trying to be discreet, use smaller dabs to allow the odor to diffuse quicker.

Vapor from dabbing diffuses quicker than smoke. Although dabbing will always produce some smell, it should fade within a few minutes so long as you have good ventilation.

How to reduce the smell of dabbing

While dabs produce significantly fewer smells than weed smoke, they still smell. If you have a roommate, nosy neighbor, or other reason to keep your consumption discreet, there are some things you can do to minimize odor.

The most obvious is to open a window. Circulating fresh air is an easy way to break up the dab smell and allow it to fade quickly.

To minimize the smell even further, blow the vapor out the window each time you take a dab.

You can also cover up the smell with other scents. This is a pretty obvious move when you are smoking a joint (everyone can smell the weed mixed with cologne, okay), but the trick will take you much further when it comes to dabbing.

Light a candle, incense, or even just spray the room with an air freshener. Because dabs already smell faint, it won’t take much to cover the scent and make it unrecognizable.

Check out: How are Cannabis Extracts Made?

Less is more with dabs

Keep in mind that dabs are extremely potent. You may need to smoke a whole joint to get as high as you’d like but only require a single dab to reach the same level. This is because dabs are highly concentrated and deliver a strong dose with each inhale.

As such, you may only have to battle the smell for a few minutes after you dab. If you only require one or two dabs to be content, you can be done with the process in a few minutes, air out the space, cover the scent, and be on your merry way. This is not possible when you smoke out of a bong, pipe, joint, or other apparatus.

Dab pens are certainly a more discreet option than dab rigs. They are pocket-sized and aren’t immediately recognizable. But do they smell? Yes. Are they less smelly than regular dab setups? Also yes.

The odor from a dab pen is much less likely to permeate a room. In fact, it may only linger for a minute or two before vanishing.

Of course, you should test out whatever dab pen you use before taking this as advice. Savvy housemates may know exactly what that distinct smell is all about.

Dabs smell. They don’t smell as strong as weed smoke, though, and can serve as a good alternative. Since dabs produce vapor, their smell is not harsh or reminiscent of something burning. It is often an earthy, herby smell instead.

If for whatever reason, you need to keep your cannabis consumption undisclosed, dabbing may be a good option. Keep in mind that dab rigs are not super portable or convenient, though, and the sound of using a torch and other tools may be obvious to some. But if you’re just worried about keeping the smell out of the house, dabs will be much less fragrant than smoke.

Dab pens may be an even better discreet option for those trying to keep smells and sounds down. Since they can fit in your pocket, you can take them on the go and use them whenever is convenient. Plus, their smell tends to dissipate even faster than typical dabs.

Of course, if you really want to keep your consumption discreet, there are even better options. Opt for a beverage, edible, or tincture to get high without any smell or obvious signs.

We have all of this and more at Piece of Mind Cannabis! Our Bellingham pot shop, Alaska dispensary, Spokane weed store, and other locations are all stocked full of concentrates, flower, edibles, beverages, tinctures, and so much more.

Now that you know everything about dabs, why not grab a few next time you go shopping at your local POM Cannabis dispensary?

Kush Mints is a popular strain in the Cookies family. It crosses Animal Mints and the classic Bubba Kush, resulting in a high-THC hybrid with a unique, mint taste. While Bubba Kush is a famous, mythical strain from the ’90s, Animal Mints is a relatively new Cookies cross from Seed Junky Genetics. Kush Mints typically has multi-colored dark purple and dark green buds with orange hairs, and its strong euphoria may be too much for novice consumers. Kush Mints has a complex Cookies smell and taste with a trademark mint aroma and taste woven in. It’s usually grown indoors, hydroponically with technical skill for best results. Add Kush Mints Diamonds by Cold Smoke Concentrates to your online cart today for fast and easy in store pick up!

Bluntz is a sativa-dominant hybrid strain that helps promote cerebral sensations and feelings of euphoria, along with a very slight body sensation. Add Bluntz Reserve PHO Badder by SKoRD to your cart and place your pre-order for pick up, today!

Lifted OG is an indica-dominant hybrid that offers uplift, sweet mental effects, plenty of tingly euphoria, and full body relaxation. Rosin Jam stands apart from other hash oil varieties that use harsh chemicals or solvents to break down the cannabis plant into oil. Add Lifted OG Rosin Jam by Constellation x Lifted to your cart and place your pre-order for pick up, today!

GMO is an indica-dominant hybrid cross of Girl Scout Cookies with Chemdawg. This strain produces a euphoric high with mentally uplifting effects. In large doses, this strain may lock you to the sofa. GMO boasts a diesel aroma and a garlic taste. Add GMO Rosin Caviar by Common Roots, a Green Rush Co. to your cart and place your pre-order for pick up, today!

Gorilla Crasher is a strain that produces mind and body effects. Gorilla cream boasts grape notes and a creamy taste of milky clouds upon exhale. Add Gorilla Crasher Sugar Wax by Playa Grande to your cart and place your pre-order for pick up, today!